Answers to the puzzles below will appear on this page.   If you have an answer, please speak with me, email, or add a comment to this post.

03/07/2014  Where is this bridge?    It's 5 (2+1+2) tracks wide & next to a former school.   It is likely to have carried considerable coal traffic - anyone got more history?
04/07/2014  Neville Whaler writes: It is bridge no. 4 Wellington Road on the line between Deptford Junction and Lambton Staiths, the extension of the Pallion to Deptford Branch. The adjacent old school is Simpson Street. Between Deptford Junction and bridge 4 there were the up/down lines from the staiths plus five holding sidings on the river side of the running lines. These lines converged just before, and on the bridge itself. Wellington Road formerly went down to Ayre's Quay gas works and some riverside housing. "Smiles" skips and scrapyard now occupy this area. The five holding sidings were used when the staiths lines were full awaiting the wagons being emptied into the ships. Although all the tracks and structures were NER/LNER then BR maintained... the signalbox at Deptford Junction was manned by the Coal  co./ NCB on an "as required" basis. After the lines went into two at bridge 4, they then entered a deep stone walled cutting before entering the twin tunnels leading to Lambton Staiths.   The lines were abandoned with closure of the staiths in January 1967.   [1946 OS map section - bridge is left of centre]

No.14
30/06/2014  Where is the branch line on which this overbridge & viaduct lie?
29/11/2016  Richard Hannay correctly answered:  The Tees Valley Railway, opened in 1868 from Barnard Castle to Middleton-in-Teesdale (it split off from the Stainmore route between Barnard Castle and Lartington), which was originally going to go to Alston but ended at Middleton-in-Teesdale.

After the split from the Stainmore route, the stations were (in order) Cotherstone, Romaldkirk, Mickleton and Middleton. The viaduct is the Baldersdale Viaduct between Cotherstone and Romaldkirk, the overbridge looks to be on the same stretch (there's another overbridge between Romaldkirk and Middleton before coming to the Lunedale viaduct). Most of the line is a very pleasant pathway. 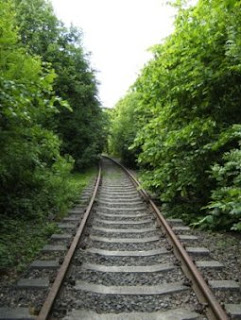 No.7
11/12/2011  Where is this and what traffic did it carry?
17/12/2011  Again, first fully correct answer from Neville Whaler, who also sent the differently angled b&w shot from 1967.
22/12/2011  Eddie Gregg Snr identified 'Hangman's Bridge" crossing the River Don.
It's near Pontop Crossing where the Newcastle to Sunderland line crossed the Stanhope and Tyne route.   This bridge last carried Tyne Dock - Consett iron ore and Boldon Colliery coal about 40 years ago.   OS ref NZ 349628.   More info at Boldon Steam. 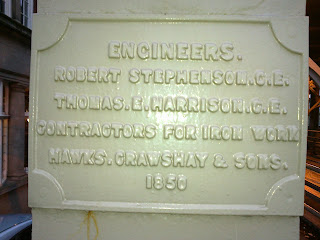 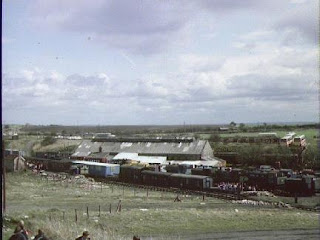 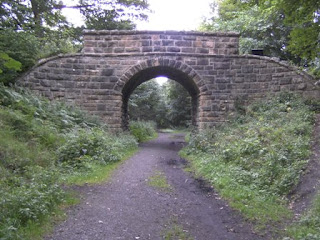 No.2
18/07/2011   Identify this local bridge.
04/08/2011   Chris Allen was the first person to identify this as a bridge over the former Consett Iron Co line between High Spen and Chopwell, in Chopwell Woods, OS ref NZ 135589.  He also referred to a photo of a CIC A tank passing under the bridge - for more details, see blog for 4 August, "Puzzle Corner Solved". 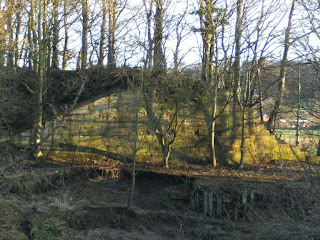 You may write here about these puzzles, or add your own .....

After the split from the Stainmore route, the stations were (in order) Cotherstone, Romaldkirk, Mickleton and Middleton. The viaduct is the Baldersdale Viaduct between Cotherstone and Romaldkirk, the overbridge looks to be on the same stretch (there's another overbridge between Romaldkirk and Middleton before coming to the Lunedale viaduct). Most of the line is a very pleasant pathway

Richard - thanks for looking back & providing a full & correct response, which I've copied next to the puzzle. I added a few puzzles in mid 2014 but had given up expecting any answers other than Neville's response about Deptford. All puzzles are what I would consider local, within about 50 miles of TR.