In the 1830s two mineral railway companies connected the Tanfield area to industry in, & export from, South Shields.   They also built the first passenger railway stations in the borough, which are included below with all railway stations in South Shields of which I'm aware.   Read "The Railways of South Shields" by Neil Sinclair & Ian Carr for more info.
The Brandling Junction Railway took control of the Tanfield Branch from 1839.    It could then move minerals from Tanfield Moor not only to the Tyne at Redheugh, but also to the more navigable reaches at South Shields.   The Stanhope & Tyne therefore lost the Tanfield Moor & other traffic to the BJR, leading to the collapse of S&TR business in the 1840s.


Chichester is not on the original S&TR route, but on a deviation to the south of what became the electric tram sheds (still in use by Stagecoach, with some track in place).   This deviation avoided level crossings at Dean Road & Laygate Lane - alignment of which is evident in existing structures.

We now head for some of the other railways & stations of South Shields ..... 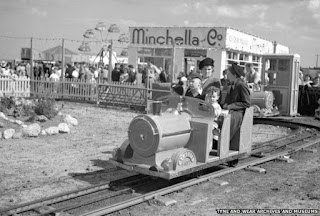 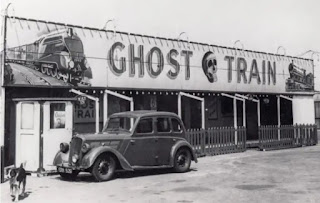 There were other stations in the amusement park,
which is on the sands at the end of Ocean Road.

So, how many stations in South Shields?   I count about 20 on different standard gauge sites, excluding those (eg Jarrow, Boldon & East Boldon) just beyond the isthmus bounded by the Tyne & the North Sea.

South Tyneside History web also shows the scale of the task of handling ballast hills.   Ballast waggonways were the first railways within South Shields.   You can still walk along one - from under the Metro bridge at Crossgate, alongside Erskine Road (where E9 worked) to the Bents Park.

A Google image search for railways of South Shields yields many interesting photos.

If you have more information about the stations or railways of South Shields please share it by commenting on this post, emailing, or perhaps develop another post.
Posted by Derek at 6:00 pm

Email ThisBlogThis!Share to TwitterShare to FacebookShare to Pinterest
Labels: History, Other

Hi Derek, I asked on Facebook and I've managed to get a photo of south shields low station , Alfie

A comprehensive photographic / map journey through the railways of South Shieldx. It compliments the (very good) book mentioned on the subject. Well done!

I've seen the (old) photograph of Tyne Dock station before, and the caption in that book stated they were removing the level crossing and replacing it with a rail overpass

Thanks for the interest in & comments about this.

Tyne Dock changed as the town & (coal) trade expanded. From the photo & the street layout it looks like there was a road crossing immediately east of the BJR station. A replacement road (Boldon Lane) to the Dock was cut under the S&TR & BJR routes to the west, possibly around the same time as the tunnel on the BJR route was formed under the approach lines to the Dock, & the station changed to an island platform to the east of the former crossing. (The old BJR station was on the alignment of Boldon Lane cut & where bridges for S&TR/BJR routes were installed.)