Photo from the website of Suscram, a group from Cramlington which promotes cycling on the former waggonways of North Tyneside.   It also has an interesting history of Rising Sun Colliery with photos. 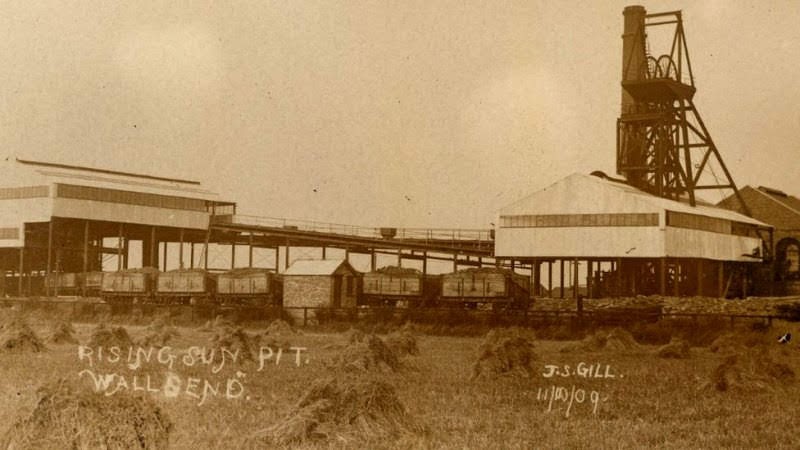 Rising Sun Colliery lay between Battle Hill & Benton in North Tyneside.   Sinking of the colliery by the Wallsend & Hebburn Coal Co. started on 9 July 1906 & production began in 1908.   In 1935 it was described as probably the most complete coal preparation plant in the world, providing dry-cleaning, wet-washing, wet & dry screening, blending & mixing, plus other processes for producing high quality product.   During modernization in the 1950s a wider No.3 shaft was sunk to 1250 ft to increase output, & facilities added for another 500 workers.   In 1965 1,442 people worked below ground & 280 on the surface.   The colliery closed on 26 April 1969, making 1,180 people & 26 pit ponies redundant.   The colliery buildings were demolished and today the site forms part of the Rising Sun Country Park.

Coal from Rising Sun was initially moved down the Killingworth Waggonway (a late 18th century Grand Allies route).   After WWII this waggonway went out of use & the eastward route shown on the map joined the pit to the Tyne via the Seaton Burn waggonway route to Whitehill Point.

Those with a local interest may like to read historical notes on Wallsend Colliery, which had the same owners as Rising Sun.