I've been asked to explain why 3 rails were used on self acting inclines, such as those at White-le-Head on the Tanfield Branch.   I'll use the similar Birkheads Incline half a mile east of Marley Hill on the Bowes Railway as an example, because there are diagrams & photos:

White-le-Head was a gravity (self acting or balanced) incline like Birkheads (ie fulls down pull empties up).   The principle used a measured rope round a wheel or drum at the bank head, braked to control descent (at up to 20 mph) of the full waggons attached at one end, empties attached to the other.   A core idea is that the rope does not cross itself, so the rope end used for fulls is used to attach to the next set of empties to ascend, which come up the same side of track as the last set of descending fulls.   At the top of the bank, the empties go over a kip (change in gradient, to allow them to run freely forward) on the same side as the rope end coming up.

Fulls start from the dish, which is between the two kips, & are directed left or right according as the empties are coming up right or left.   The rope therefore does not cross itself. 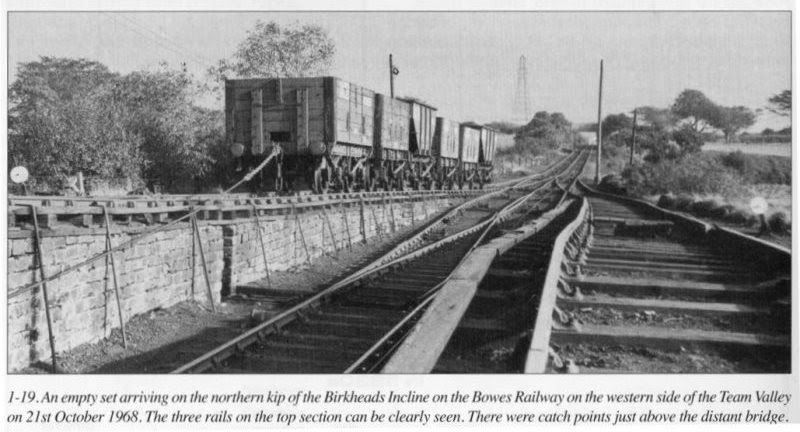 The purpose of a 3 rail section is to minimize the width of the formation (reducing cost of bridges etc), keep rope ends apart, & reduce pointwork.   The meetings are two distinct parallel tracks where the sets of waggons pass.   It was also usual to reduce to a single line below the meetings to minimize formation width & because there was only ever one end of the rope below the meetings.    In this case, the fulls going down automatically flip the trailing point at the start of the single line, so the next set of empties come up the same side on the same rope end.    This was not done above the meetings because the 2 rope ends, travelling in opposite directions, would run too close together, couldn't sag onto a common roller, & require staff to change a point at the top each run.   3 rails keep the rope ends apart & automatically direct the empties over the correct kip.

Email ThisBlogThis!Share to TwitterShare to FacebookShare to Pinterest
Labels: History

Self Acting Inclines were always fascinating to watch - and to listen to - the rope running on horizontal rollers and vertical sheaves (on curved track). Many hours spent as a child at Bakers Bank Head (Sunniside) as full wagons descended to Watergate, their weight bringing the ascending empties over the 'kip' to roll to a halt with a loud 'bang' of buffers as they met the previous 'set'. They would be collected three times a day by the Bowes Bridge 'N10' (which had brought the fulls to the bank head) and taken to East Tanfield / Tanfield Lea Collieries. I recommend the late Colin Mountford's "Rope and Chain Haulage" published by the Industrial Railway Society: the definitive work on the subject and lots of content concerning Colin's beloved National Coal Board (Dipton to Jarrow) Bowes Railway.